This excursion of 1 day tour, has been designed for those who wish to enjoy two of Italy’s most enchainting medieval cities as well as one of the most beautiful italian region due to the beautiful vineyeards, farms and locan traditions.

You will picked up at 7:30am by a professional English speaking driver from our company, with a Mercedes vehicle, at your hotel, residence or any other place of your convenience. Then you will have a lovely drive up, for a couple of hours, from the region of Lazio to Tuscany across a beautiful and colourful countryside.

You can download the pdf so that you can read information of the cities as well as of the monuments that you can visit.

Siena
Our first stop will be Siena, whose historical city is still mainly surrounded by its medieval wall, and for this reason very manageable on foot. According to tradition, Siena was founded by Senio, son of Remo, twin brother of Romulus founder of Rome. Siena, actually is well- known as the birth place of the beloved Italian Saint Catherine.

As you enter the old city, you will immediately notice an ancient and mysterious atmosphere, floating through the little, narrow streets and squares. At the heart of the city is the gently sloping shell shaped main square, Il Campo. This beautiful brick-tiled square was laid down in the 14th century. It has been seen in films, photographes, and advertising campaigns and became famous for the running of  Palio, that takes place on july 2nd and August 16th. The Palio, a bareback horse race, that was first recorded in 1283, but it might have had its origins in Roman military training, is one of the main event in the life of the Senese people.The local people come out in traditional costumes, parading through the square, and twirling and throwing huge flags. This is an amazing experience to see!

Then you will have a chance to see the Duomo, Siena’s main church and oldest building. It was built between 1136 and 1382 and has a mix of gothic and Romanesque elements in its architecture, which gives it an exclusive and breathtaking sense of history and beauty. It has a magnificent façade of white, green and red marble, and impressive dome and a 13th century bell tower in green- dark and white steps.

Inside there are decoration carried out by some of the best artist of the time like Nicola Pisano and Pinturicchio. Noteworthy is the toll and  trim Torre del Mangia, that is possible to visit its tip top and from there the whole panorama of Siena. 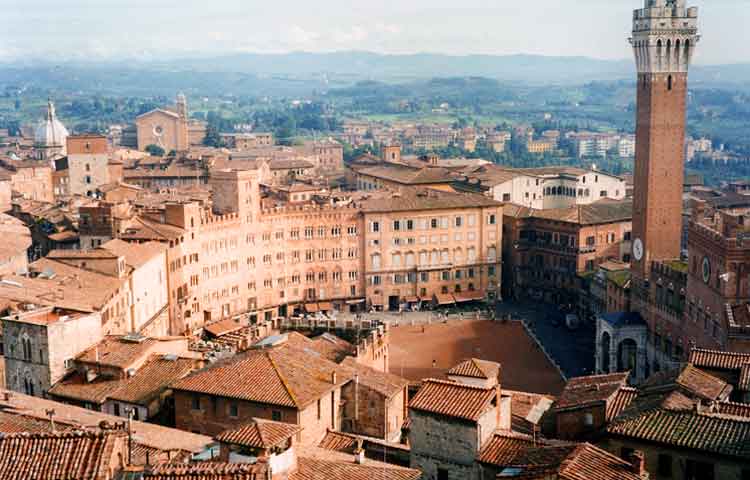 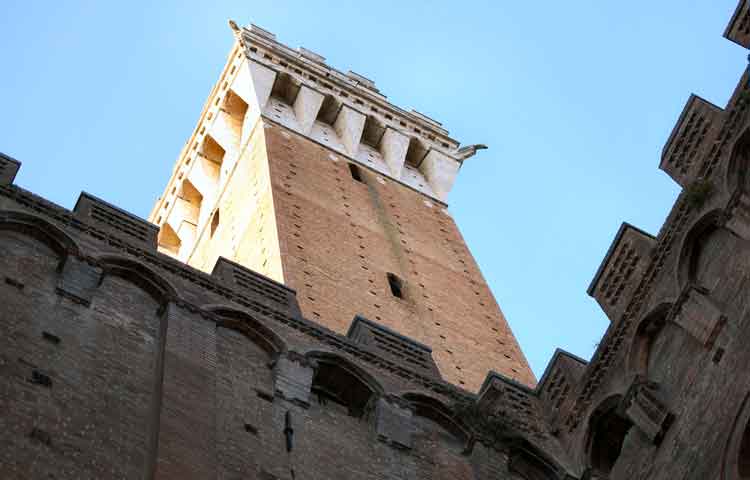 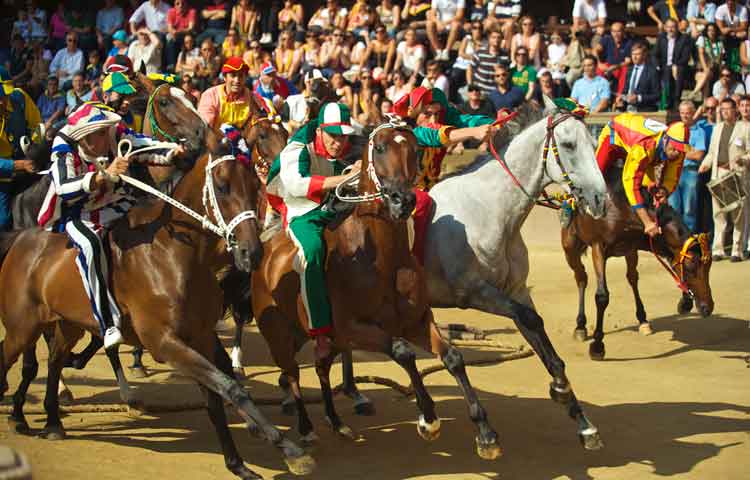 San Gimignano
It can be seen from far-off sitting on its hill, with its splendid skyline made up of towers. This 11th century town rises 334 meters above the Elsa valley, along the ancient Via Francigena, on which trader and pilgrims going to Rome travelled. San Gimignano prospered considerably during this period thanks to this route and all the inns that were built along its way to accommodate the Pilgrims.

With prosperity, many patrons in San Gimignano were able to hire the best craftsmen and artist to magnificently decorate the churches and monasteries. Dante Alighieri, Italian poet, came to San Gimignano on May 8th, 1300 as the Ambassador of the Guelph league in Tuscany. Today San Gimignano’s important cultural and natural heritage have been recognized by Unesco.

Beside its 13 remaining towers (once were about 40!) you can also see the Duomo or collegiate church and its magnificent frescoes, the Palazzo del Popolo, The Palazzo Nuovo del Podestà which is now the town hall. Another interesting place to see is the church dedicated to Saint Augustine with it marvellous fresco cycle of the Saint titular painted by Benozzo Gozzoli. Then the museum of holy relics and the infamous museum of torture and its macabre display of early torture instruments. Above all take a moment of your time to enjoy a stroll along the main street were you can find typical and delightful shops that sell local products such as delicatessen and wine sellers.
Then, you will make your way back to Rome!

We suggest wearing comfortable shoes and appropriate clothes for the visiting of churches, monuments and museums. 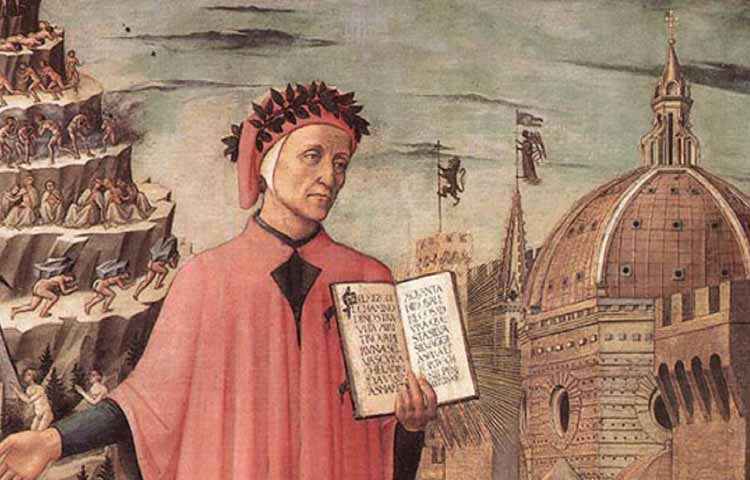 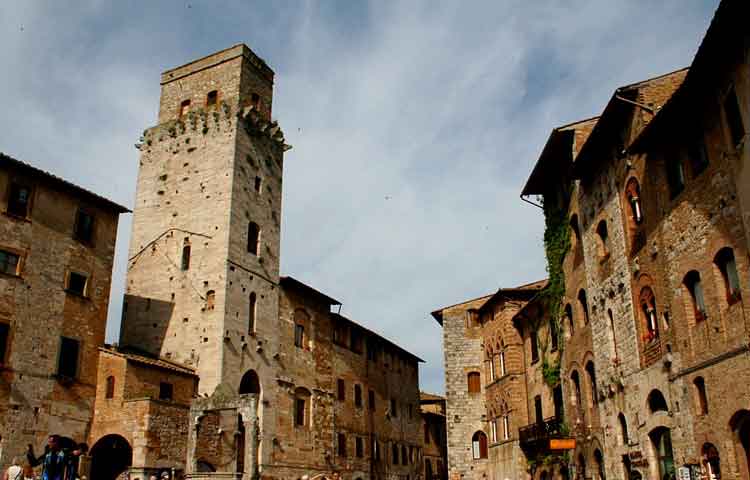 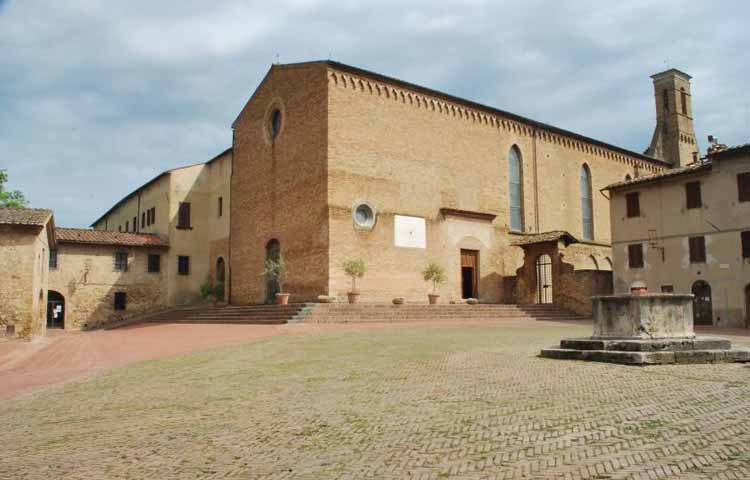