Dear guests, this excursion 1 day tour has been designed for those who have already visited Rome, and wish to enjoy relax, countryside, genuine food.

A professional English speaking driver from our company will be waiting for you at 8am at the gangaway of your ship holding a sign with your name on it. Then you wil make your way to Civita and Orvieto through a spectacula contryside while sharing your interest and schedule with your driver.

You will be shown and suggested about the sites to be visited by your driver, then you can taylor your available time according to your needs!

you can download the pdf so that you can read the historical information about the cities and monuments.

Civita di Bagnoreggio
This charming little town was founded by Etruscans around 2500 years ago on top of a hill formed by “tufah” stone. The area must have been really different in those days. The natural erosion and earthquakes have really changed the town a lot less space on the hilltop than it originally had. In 1695 one of those earthquakes destroyed the sort of natural bridge that linked Civita to the bugger nearby the town of Bagnoregio. The natural erosion hasn't stopped and the sides of the hill keep crumbling down and therefore they call Civita “ the dying city”. Civita, like an island is connected by a narrow walkway to reality and to the surrounding countryside; it takes us for away, not so much in distance as in time...

There is a feeling that one is leaving the real world, and this feeling becomes stranger after entering the ancient city gate called S. Maria or del  Cassero, the only survived; this medieval entryway incorporates an ancient Etruscan gate, dug in the tufah stone. The main street leads to Saint Donato square, maybe it is the place of the old Foro (market). There stands the church of St. Donato Cathedral of the bigger town Bagnoregio until 1699; medieval edifice with a nice belltown of the XII century and XV hundreds facade. Inside you can admire an inlaid wooden crucifix from Donatello school (XV cent.), under the lateral altars the bodies of St. Vittoria, vergin and Roman martyr and St Ildebrando, bishop of the city between 835 and 873.

Noteworthy also is the renaissance Palace Mazzocchi-Alemanni with its beautiful bossed gate. At the end of the main avenue that crosses the city, a small platform opens your sight towards an ocean of earth erosions of every kind of tonality, and every kind of shape. This makes your view breathtaking. 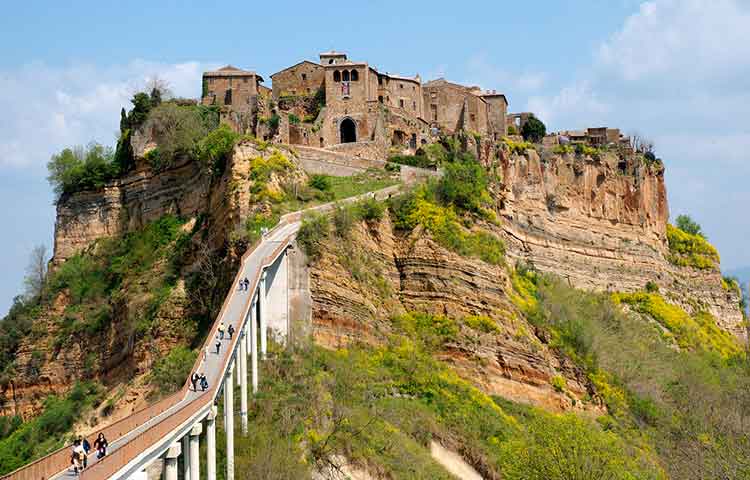 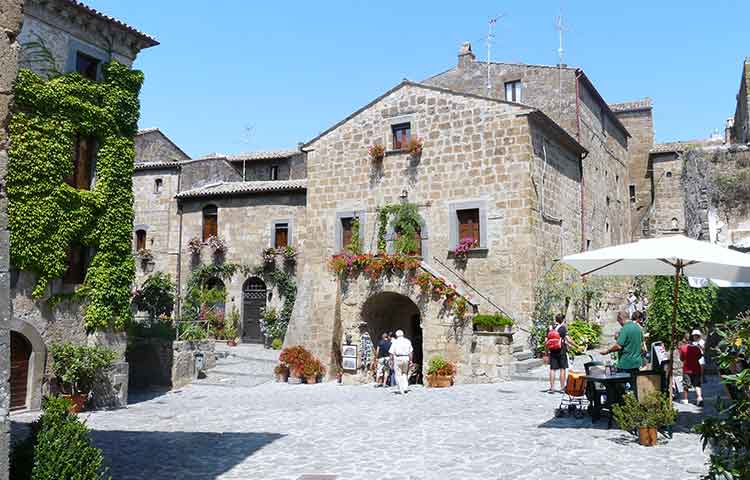 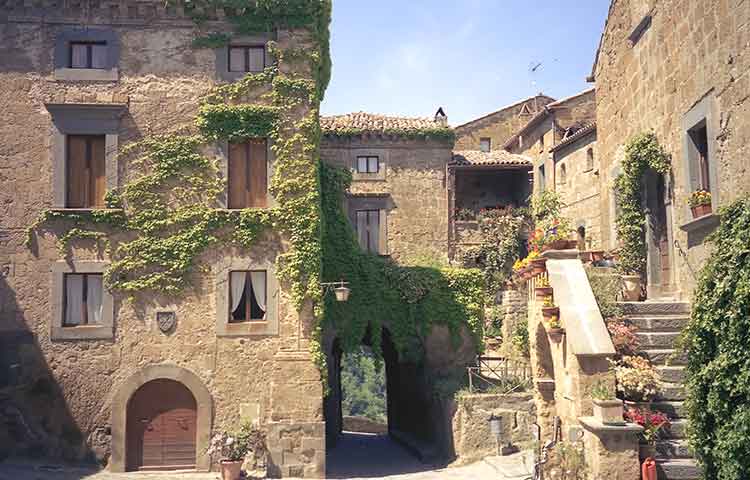 Orvieto
is about 30 minuts far.
Even Orvieto appears to us from the distance sitting on its plateau formed by the volcanic "tufah" stone: what a great view!!! Founded by the Etruscan around the VII cent. b.c was called VELZNA, but well known by the Romans with the name of Volsinii. It was conquered by the latter in 264 b.c. Risen during the beggining of the middle ages became a free and rich city during the XII and XIII centuries until the cathastrophe of the pestilence in 1348. Became part of the Vatican State and fortified by the Cardinal Albornoz who built the fortress in 1364 and changed little in appearance over the centuries that followed. But once arrived in Orvieto you can't miss the Orvieto undergrounds tour!

A guided tour with an official English speaking tour guide at no – extra cost (apart from €. 6,00 admission fee for each one) will lead you to discover the city’s undergrounds . This web of subterranean galleries were created by ancient inhabitants over about 3000 years of uninterrupted digging. It is an extraordinary voyage in the past-time, an exciting itinerary that takes you, with a minimum of effort, to the roots of the city, and where the memories of its past are still alive. Orvieto is well known for its beautiful and imposing Duomo dedicated to the Assumption of the Vergin Mary and was commissioned by Pope Niccolo IV in 1290 and its building history is very likely links with the famous miracle of Bolsena.

Now is time  for lunch!!!
People here have their main meal in the middle of the day after which they like to nap. Shops in fact don’t re-open before 3/4:00 pm.
It's the famous Italian tradition of the “siesta”. You can choose between a light lunch in the wine cellar on the main square (weather permitting you can eat outside) and some local cuisine in a typical restaurant housed in the in the caves that people of Orvieto dug in the tufah stone underneath the city. After lunch you‘ll have time to visit the well known Duomo.
After visiting the Duomo you can stroll down Orvieto's quaint narrow streets crammed with its colourful shops selling beautiful ceramics. Orvieto produces one of the most famous Italian white wines and the wine shops on the squares offer the opportunity to taste some of the local wines and to eat some of the prosciutto, salame and cheeses locally produced.
What a wonderful day!!!!!
Then, you will return your residence/hotel 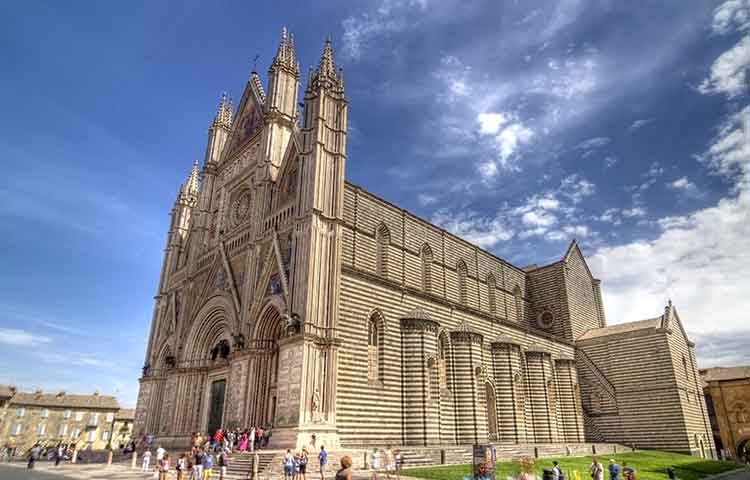 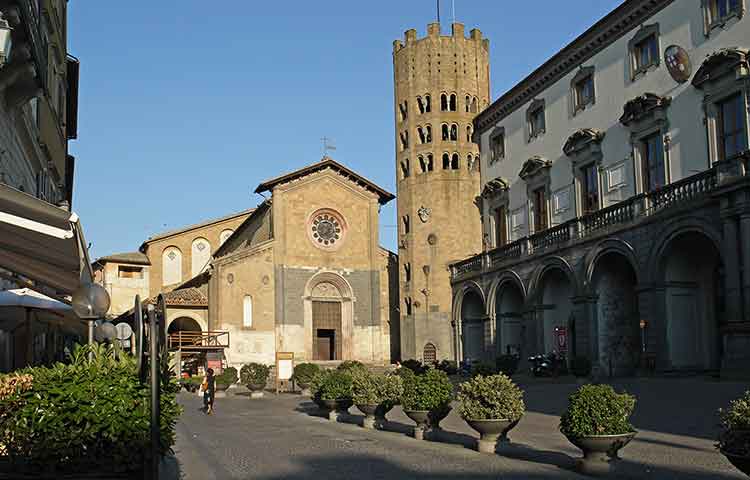 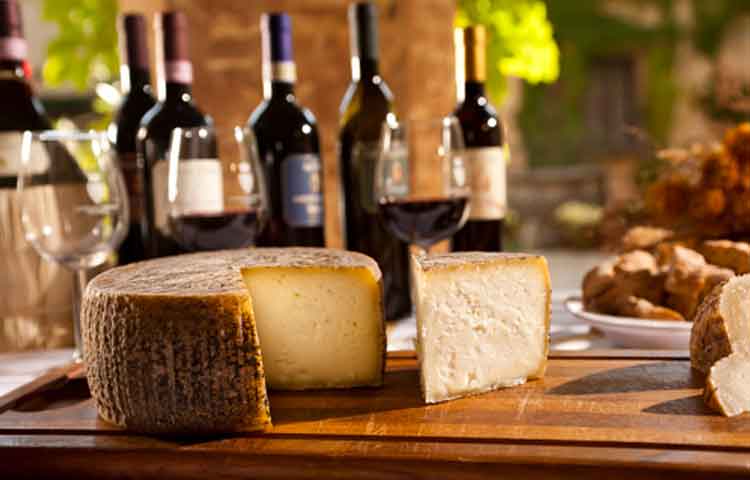